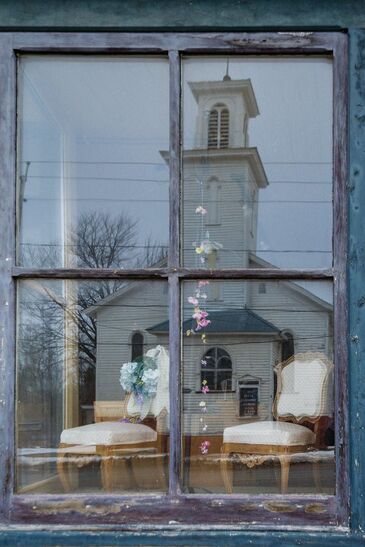 The small village of Rensselaer Falls, New York in the Town of Canton played a key role in shaping the history of St. Lawrence County. This involved many important exchanges in commerce and mutual progression between locations throughout the region. Modern technology, involving both natural resources and man made efforts, impacted the economic and political dynamics of St. Lawrence County. Rensselaer Falls, due to its strategic location nestled between multiple kinds of waterways and already established towns, had potential to be a powerful Village, but because of multiple tragedies like fires and floods, Rensselaer Falls’ growth was underdeveloped.

Rensselaer Falls naturally lies on the Oswegatchie River, an oxbow. The natural canal (the Upper and Lower Lakes) connected this river to the Grasse River near Canton. With the advantages provided by this combination of waterways and location between already established villages, proprietors began to notice the area. In 1839 a forge was built by Tate, Chafee & Co. Robert Tate deemed the area which would be Rensselaer Falls, Tate Ville. The forge, which first established a productive industry due to its tactical location near the Oswegatchie River, had three working fires. These smelted specular ore from Herman and bog ores located in a neighboring town, Lisbon. Mr. Henry Van Rensselaer, the proprietor of many businesses and member of almost every club, built a sawmill during the same year as the forge.  The waterfalls gave abundant power and encouraged other business to settle on the banks there. Having built other mills in the surrounding areas, like Eagle Mills in the village of Canton, his influence in the community was apparent.

Rensselaer Falls by comparison to other municipalities has lost hotels, schools, industry, transportation, business and population. Today the village is modestly home to a post office, liquor store, library, historical society, yarn shop, general store and a produce stand. Regardless of the apparent bottom Rensselaer Falls has hit, its residents are as optimistic as ever about its history and restoration, “It has been a long time. Rensselaer Falls has not had a festival since the late 1980s… The street was crowded with village residents, both past and present… The centennial festivities brought a change in routine for the 100-year-old town… Residents may not have to wait 30 years for another festival. [The] event organizer… it may return next year.”

Since the mistakes previously made in the past have not been thoroughly looked into or analyzed for correction, the village remains hopeful yet stagnant. Rather than mills, forges and out of date business, an area like Rensselaer Falls could thrive as a natural resource and fresh market society. With a myriad of wildlife, natural stones, sightseeing, recreational outdoor activities, forests and many types of preserves, it would be beneficial to aim in a logical direction such as this.